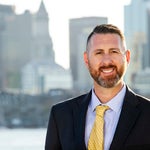 Mr. Desrochers is the managing attorney at the office that was founded in 1999.  Matthew helps homeowners avoid foreclosure and get out of debt.  This work consist of Loan Modification, Short Sales, Chapter 13 and Chapter 7 bankrcupty cases, including mortgage settlement and IRS Offers in Compromise.

In high school Mr. Desrochers received the highest award allowed in the Boy Scouts of America-the rank of Eagle Scout. Mr. Desrochers received his Bachelors of Arts in Environmental Science in 1995 . In 1999, he received his J.D. degree from the Massachusetts School of Law. He was admitted to the Massachusetts bar and the United States District Court in 1999.

Matthew is a father of FOUR boys. One set of Twins and two other miracle children.  Matthew and his family spend their time together enjoying the waters of Lake Winnipesaukee boating, fishing and sailing.

Matthew is a political junkie and enjoys all forms of music including learning the magic of the acoustic guitar.